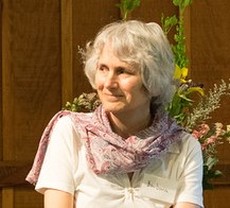 My introduction to yoga was taking classes in hatha yoga (physical postures) at an ashram in New Delhi during a two-month stay in India in 1979.  As I returned to California and entered law school, I sought out yoga classes and have been involved with the practice of yoga in some form ever since.  During more than 25 years of practicing law in San Francisco and Washington, D.C., I continued to study and practice and grow in yoga.  As I studied and understood more, I was pulled to look further into the teachings of yoga beyond the physical postures and am deeply grateful to have had the opportunity to study over many years with outstanding teachers.

I met Paul Muller-Ortega in early 2009 and was immediately drawn to his clear and powerful teachings of the sublime essence of yoga – of life itself – and its core practice of deep meditation.  I began formal study with Paul in his meditation school Blue Throat Yoga and received the practice of Neelakantha Meditation in July 2009.  During seven years of intensive practice and study I experienced a transformation and expansion of my perspective on life.  I found myself becoming more accepting and less reactive, less judgmental and more willing to take on challenges that take me out of my comfort zone, pushing through my own internal barriers.  I experienced greater equanimity, increased creativity and effectiveness at work, and more flexibility in dealing with life’s challenges.  It was a natural progression to work toward being able to share this upliftment of life with others and in July 2016, seven years after I first received the practice, I became an Authorized Teacher of Neelakantha Meditation.  I am delighted to now be able to offer this exquisite and transformative practice to others.